I remember a few years ago I went and spoke to a high school football team back in Iowa about bullying issues. Going in, I just kind of figured it would be your typical guest-speaker-type talk — I spoke about doing the right thing, and leading by example, and treating people with respect, and being good people. I also spoke about bullying and the impact it has on kids their age. Then, after I had finished, I watched as that group of players went over and talked to this boy they knew who was being bullied at their school.

It was at once amazing and inspiring. I was so proud of them at that moment, and I still think about it often.

The experience really brightened up that kid’s day. But it also allowed him to understand that he wasn’t alone, and that he had some allies at school. That’s huge when it comes to bullying because, as I can attest, sometimes when you’re stuck in a terrible situation it feels as though you’re all alone, with nowhere to turn.

For those kids — and grownups — out there who are witnessing incidents of bullying, believe me, I get how difficult and complicated it can be to try and do something about it. During my childhood there were several times when I was a bystander to other kids being bullied, and I didn’t take any action. Today, thinking back to those moments — and knowing that I didn’t alert a teacher, or intervene, or do anything to help — is tough. But at the time, I was just really scared. It’s extremely daunting to stand up to a big, powerful bully who could just as easily squash you instead. So in many cases we just kind of freeze, or we go along with the crowd.

But it’s important to realize that taking action when you see bullying occur doesn’t have to mean verbally or physically confronting the bully. One of the most valuable things I learned while being trained as a teacher was the importance of encouraging people to be “upstanders” instead of bystanders. You don’t necessarily have to intervene by injecting yourself into an altercation. You can alert a teacher or another adult who may be able to help. Or, if that’s still too difficult, you can go and speak to the child who is being bullied, and let her or him know that they have a friend — someone they can rely on and talk to.

This is an excerpt from an original story Let's Talk About Bullying, written by Arizona Cardinals running back David Johnson, that appeared on The Players’ Tribune. 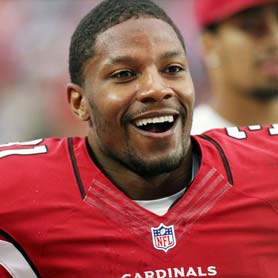 David is an advocate for STOMP Out Bullying. Visit stompoutbullying.org to learn how you can help stop bullying.

My Triumph Over a Bully By The Witch Series